Probiotics may support the respiratory health of babies and young children 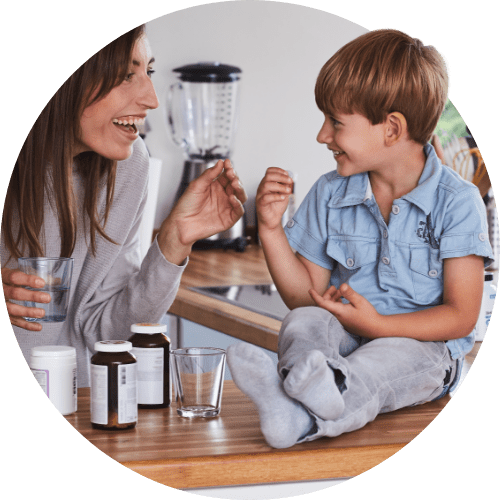 High-quality studies suggest that the Lactobacillus rhamnosus, LGG® and Bifidobacterium, BB-12® (hereafter referred to by use of the trademarks LGG® and BB-12®) probiotic strains may support respiratory health in babies and children

The immune system of babies and young children is not fully developed,1 and they are therefore more vulnerable to respiratory tract discomfort.2

Although respiratory tract discomfort tends to go away on its own, it is still the most common reason for children to visit a health care professional.6

Probiotics may help lower the occurrence of respiratory tract discomfort

Another study showed that the use of LGG® may also support respiratory health in children who are hospitalized for other reasons.8 In the study, the children who were given fermented milk that had been supplemented with LGG® had fewer digestive system conditions that lasted more than two days and less respiratory discomfort that lasted more than three days when compared to the children who were given a placebo.8
Click to read more about the Chr. Hansen LGG® strain

days less away from day care vs. placebo according to the study

The respiratory health of babies may be supported by BB-12®

Studies suggest that the BB-12® probiotic strain may also support the respiratory health of babies. Babies given BB-12® from the age of 1-month until they were 2 years old experienced less respiratory discomfort.9, 10
Click to read more about the Chr. Hansen BB-12® strain

As discussed in this article, the LGG® and BB-12® probiotic strains may help support respiratory health in babies and children. Studies suggest that LGG® supplementation may help reduce the number of days absent from daycare.
Consult a health care professional to find out more.
Read about what to look for when choosing a probiotic.
Read about probiotics and occasional loose stools and excessive crying and fussing in babies.


LGG® and BB-12® are registered trademarks of Chr. Hansen A/S.

Lactobacillus rhamnosus, LGG® is the world’s most documented probiotic strain. The LGG® strain has demonstrated benefits across all ages and several health areas, including digestive, immune and oral health.

LGG® is a trademark of Chr. Hansen A/S

Read more about LGG®
See our other strains

The LGG® strain has demonstrated health benefits for numerous areas of health.